Posted at 05:23h in Uncategorized by Sushil Bhasin 5 Comments
0 Likes
Share
A few days ago I posted on my Facebook Timeline
Addiction to Internet.The only spot in the hospital (INHS Asvini) Colaba where I could find the Internet even though so slow 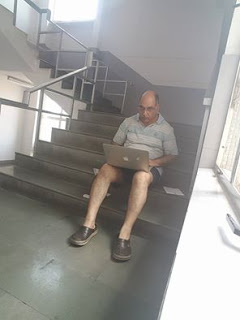 In less than 24 hours there were friends and relatives from across the globe who were advising me to take rest.
I am so touched and excited that I have so many well wishers who expressed their love and concern. Thanks a ton to all of them. And I genuinely and humbly accept their advice/ They are really well wishers.

All the same the question that pops up in my mind is what is taking rest? is it lying on bed in 180% and gaping aimlessly at the fan in the ceiling (which I did for almost 24 hours before I picked up my laptop and located this spot in the staircase.)


A small conversation with my mentor, guide, friend Gen Chinu Mahanti this morning.
Out from my Inbox. I thought I will share with you all.
Sushil :I was in Pune yesterday for training of Mercedes Benz. Today back in mumbai. Total rest today.
Chinu: Rest & you? C’mon. Your rest is when you are at work. When your mind is ticking, when u r at ur creative best. Simple, Sushil, my friend : Rest is reqd to recharge your energy. Dynamo is recharged when it’s working & in turn it energizes others, the tired, the spent out, the inert, the pooped out etc etc. You r a dynamo. And I’m in no ‘chamchabaji’ trip. And u know that. So, don’t bullshit with that ‘Rest’ crap.
I am reminded about our training in the Army on management of transport. A driver gets 20 mins rest after 2 hours of driving. In that there is a check list of jobs to be done in the 20 mins. I asked the instructor, “what rest is this if he is to do so many things in these 20 mins?”
This is what the instructor said,” Rest is not ‘sleeping.’ It is not to lye down in 180 degrees position. Its change !! From sitting in the drivers seat on a fixed position, to concentrating on the road, he is tired that. Stepping down from the vehicle, stretching his limbs, walking around the vehicle to check tyre pressure, opening the bonnet to check water and oil levels gives him the ‘change’ that him the desired rest.
So guys, when you are tired, do something different, something different, something that interests you and excites you which may not necessarily mean saying “Good night !!”
A response from Maj Gen SD Mahanti (popularly known as Chinu Mahanti), my GOC during 2002-2004

Let me introduce to you this gentleman. Brig Sushil Bhasin was my younger colleague when I was at my absolute last lap of soldiering at Bareilly as the General Officer Commanding of Uttar Bharat Area which combined the States of Uttar Pradesh & Uttarakhand. He was responsible to procure, store, feed, maintain & move (transport by air, land & if need be even by sea) combat soldiers & authorised non-military personnel numbering over 3 lakhs including their military needs of all kinds of fuel, lubricants, munitions of mind boggling quantities in volume, weight, numbers & inventory management space spread all over the geographically varying icy high mountains in the Trans-Himalayan Indo-Tibetan frontiers to the dusty-dry lands of Gangetic plains what with ‘irked’ (like the Dickens?) frequently by Kedarnath like disasters in the high reaches or the angry roars of floods in the low lands. But these were like a child’s play for the ruggedised body &, razor sharpened & ‘robotised’ mind from the early age of eleven at a Sainik School, slow ‘baked’ through the mid-teens at the National Defence Academy & ‘furnace heat hardened’ at the Indian Military Academy & sent out to lead his bunch of tough & sure footed infantry men on combat missions to near death & bring back to their home & hearth with safety, dignity & honour when he was just peeping into the age of twenty. The Brigadier’s main challenge was to keep his GOC hassle free from routine stuff so that he could devote his energies away from Brigadiers domain of responsibility & only to be approached for criticality beyond his capacity arose.  He was also assigned a small but valuable non-military task for which he neither had the upbringing nor the training, some thing I was assigned almost a decade ago, to ‘tend’ to the Army Public School where Military kids, some non-military too, studied to be a high school graduate (+2 level as we commonly know). This was valuable for it contributed a huge deal to the morale of the fighting men & women & their families. And morale is the most important ingredient of combat power; others being weapons & equipment, training synergised by leadership. This is where the Brigadier discovered his new passion: mentoring (one may call it a higher (really?) version of training). But this wise friend of mine calls it ‘Empowerment’. Visit him at his website & find out if ‘mein kya jhoot boleya’?
www.empowercamp.com, www.BrigSushilBhasin.com